The multihoster RPNet.biz, also called RapidPremium, has released version 4.0 of its website. At least that’s the official statement of the operators. In fact, there are several indications that the service has been acquired by none other than Premiumize.me, which has already done something similar with Zevera.com and the well-known torrents service Bitport.io. Officially, no one wanted to confirm the acquisition, but it is clearly evident that RPNet now also uses Premiumize.me’s download and VPN infrastructure. The supported filehosters and websites are also almost identical.

However, the offer has significantly deteriorated since the takeover. Many popular filehosters have been removed without replacement. Overall, the new version seems unfinished and hastily released. Previously offered browser addons are no longer compatible, new addons should be available soon. The same is true for the integration of Load! Only jDownloader seems to be supported. The previously available bonus function can also no longer be found. Still existing bonus points were apparently not paid out. Currently it is also not possible to sign up for a new premium account or to extend it, as no payment options are available anymore.

It remains to be seen whether the formerly good service will remain. At the moment it doesn’t look like it will. Of course, a new review from us will follow shortly. 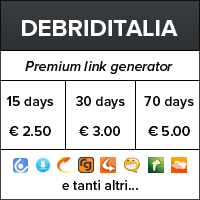